Why this matters to the lake?

Forests create an absorptive sponge that reduces the amount of runoff and pollutants entering the Lake. When forest areas are fragmented by buildings, driveways, roads, lawns, and other land use activities, the nature of the forest changes and its ability to absorb rainfall is reduced. Increased light along fragmented edges increases the opportunity for vines and invasive species to grow. Long thin areas of forest, with more edge conditions (as exist along many driveways), are less healthy and less capable of absorbing and intercepting rainfall than the same area with fewer edge conditions. Continued fragmentation ultimately leads to deforestation  as isolated areas of trees decline and eventually convert to lawn. Contiguous forest areas create wildlife corridors and habitat.

Locate buildings, roads, and other site improvements in areas that are not forested. Avoid land disturbance activities in forested areas. Restrict land clearing and disturbance within the edge canopy of the forest. Limit driveway widths to allow tree canopy to extend over the driveway. Encourage cluster developments that contain site disturbance. 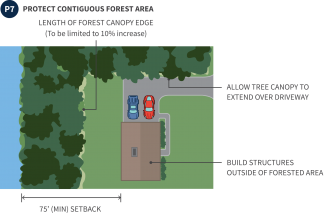 Two points are awarded for a site where all built structures and land disturbance activities occur outside of existing, intact forest and woodland areas.

OR complete the following requirements (up to 2 points)

Include the following information with application:
✓ Delineate on the Proposed Site Plan all forested areas, including for adjoining properties, and indicate that structures, land disturbance, and clearing activities will occur outside of the forested areas and not occur within the edge canopy of the forest.
✓ Provide pre-development and post-development forest canopy edge lengths in linear feet.

The LID Certification System encourages LID practices in development projects. The goal is to catch every drop of water from our built environment before it reaches a stream or lake, and reduce the non-point source pollutants to a level that is in balance with the natural systems of the waterbody.